As  accurately predicted by remote viewing in 2008 in the study from the Farsight institute – earth changes and  climate change would be more severe and more apparent when looking forward five years later to 2013. The report below, just out this week details over 10,000 cold/snow records in the U.S. alone in just a six week period. Add to this another 3171 High temperature records during this period.

cold wave lasting over a month that has generated 9787 records posted by NOAA/NWS.

If this were a month of a heatwave across thus USA, like last July, you can bet it would be MSM headlines all over the place and breathless stories from AP’s Seth Borenstein and pronouncements from the Mannian climate cartel about how all this is connected to global warming, er climate change, er climate disruption.But nary a peep so far about this cold wave lasting over a month that has generated 9787 records posted by NOAA/NWS.Conversely, here is the list of high temperatures, and high minimum temperatures.
The tally to present for the last 6 weeks

CANBERRA, Australia, April 3 (UPI) — Australia will get more, and worse, extreme weather resulting from climate change and should act now to “halt the trend,” the country’s Climate Commission said.

The global climate system, warmer and moister than it was 50 years ago, is bringing increased heat and making extreme weather events more frequent and severe, the commission said in a report Wednesday.

Last summer was Australia’s hottest ever, including the longest and most extreme heat wave on record, the Bureau of Meteorology said.

The effects of extreme weather have a dramatic impact on communities and infrastructure, with the cost often running to billions of dollars, Australian officials said.

“Only strong preventative action now and in the coming years can stabilize the climate and halt the trend of increasing extreme weather for our children and grandchildren,” China’s official Xinhua News Agency quoted the climate commission’s chief Tim Flannery as saying.

The release of the report “should end climate denial and put higher greenhouse reduction targets and adaptation to existing warming on the political agenda,” she said, calling for the restoration of funding for planning to deal with the issue.

“The cost of not acting on climate change is greater than the cost of acting.”

Rising temperatures in the U.S. already have brought more frequent heat waves, droughts, floods and other extreme weather and scientists expect more of the same as a result of climate change, according to a government study released Friday.

Average U.S. temperatures have risen by about 1.5 degrees Fahrenheit since 1895, with most of the increase occurring in the past 30 years, according to a draft of the National Climate Assessment.

Freezing Britain’s unusually harsh winter could have cost thousands of pensioners their lives.

This month is on track to be the coldest March for 50 years – and as the bitter Arctic conditions caused blackouts and traffic chaos yesterday, experts warned of an ‘horrendous’ death toll among the elderly.

About 2,000 extra deaths were registered in just the first two weeks of March compared with the average for the same period over the past five years.

Meanwhile, power cuts and travel disruption will continue to blight Britain today, as more snow falls across the country on another bitterly cold day. 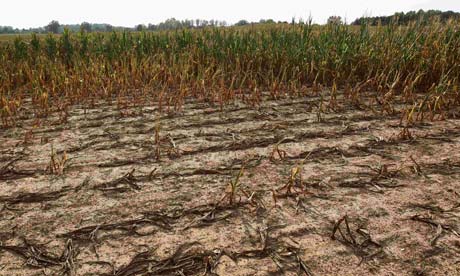 Drought that ravaged US crops likely to worsen in 2013, forecast warns

The historic drought that laid waste to America’s grain and corn belt is unlikely to ease before the middle of this year, a government forecast warned on Thursday.

The annual spring outlook from the National Oceanic and Atmospheric Administration (NOAA) predicted hotter, drier conditions across much of the US, including parts of Texas, Oklahoma and Kansas, where farmers have been fighting to hang on to crops of winter wheat.

The three-month forecast noted an additional hazard, however, for the midwest: with heavy, late snows setting up conditions for flooding along the Red and Souris rivers in North Dakota.

Last year produced the hottest year since record keeping began more than a century ago, with several weeks in a row of 100+degree days. It also brought drought to close to 65% of the country by summer’s end.

The cost of the drought is estimated at above $50bn, greater than the economic damage caused by hurricane Sandy

The drought area has now fallen back somewhat to 51% of the country. But even the heavy snowfalls some parts of the country have seen were not enough to recharge the soil, the NOAA scientists said.

It said drought conditions were likely to remain in the central and western parts of the country, and could expand in California, the south-west, the southern Rockies and Texas. The Florida panhandle should also anticipate drought conditions, according to the forecast.

Scientists warned of an increased risk of wildfires, because of the dry conditions, for parts of Minnesota and northern Iowa.

Other areas of the country however were in line for floods, with the most significant along the Red and Souris Rivers in North Dakota. NOAA said it was also expecting some 20,000 acres of farm land to be flooded in the Devil’s Lake area of North Dakota.

Some flooding was also expected along the upper Mississippi into southern Wisconsin, northern Missouri and parts of South Dakota and Iowa.

Meanwhile, a poor snowpack suggests the drought will persist in the Rocky Mountain states and California.

“The drought that we accumulated over the last five or six years in the middle part of the country and also the south-west is going to take a long time to remove,” said Furgione. “The deficits in the soil and very unlarged, and it is very unlikely the seasonal mean precipitation will ameliorate that.”

Farmers had been anticipating a poor start to the growing season, especially in the south-west and areas such as Texas, Oklahoma and Kansas, where the drought has not relaxed its grip.

Farmers in some areas did not even bother to plant winter wheat this year.

According to the historical record dating back to 1895, 2012 was the hottest year this country has ever seen. But it’s not just that the temperature has risen — from deadly tornadoes to the widespread coastal damage inflicted by Superstorm Sandy, we seem to be living through a period of intensified and heightened weather extremes.

Whether or not these harsh weather events are connected to global warming or are simply the random violence nature visits upon us is one of the central questions that environmental reporter Justin Gillis tackles in his “Temperature Rising” series for The New York Times. The series focuses on the arguments in the climate debate and examines the evidence for global warming and its consequences.

“It’s an ongoing struggle for the scientists to puzzle out which of these things are linked and which ones aren’t,” Gillis tells Fresh Air‘s Dave Davies.

Gillis notes that there is “robust, healthy science” that provides evidence of climate change. Within the scientific mainstream, however, he says there is a considerable range of views about the risks we’re running by causing what is essentially (on the geologic time scale) an instantaneous increase in carbon dioxide in the atmosphere. One such risk is rising sea levels. Gillis says experts believe sea levels will rise at least 3 feet in the next century, and that number could be as much as 6 feet.

Scientists said Monday they have identified a physical mechanism behind the extreme weather that has plagued many parts of the world in recent years — and that it is tied to climate change.

Since 2010, for example, the United States and Russia have each suffered scorching heat waves, while Pakistan saw unprecedented flooding.

Scientists from the Potsdam Institute for Climate Impact Research (PIK) have traced the events to a disturbance in the air currents in the northern hemisphere, in a new study out Monday in the US Proceedings of the National Academy of Sciences.

“An important part of the global air motion in the mid-latitudes of the Earth normally takes the form of waves wandering around the planet, oscillating between the tropical and the Arctic regions,” lead author Vladimir Petoukhov said in a statement.

“During several recent extreme weather events, these planetary waves almost freeze in their tracks for weeks. So instead of bringing in cool air after having brought warm air in before, the heat just stays,” he said.

In an ecosystem ill-adapted to long periods of extreme heat, the stress can be disastrous, with high death tolls, forest fires, and agricultural losses.

For instance, during Russia’s 2010 heat wave — the worst in its recorded history — wildfires spread out of control, killing dozens of people, burning down thousands of houses and threatening military and nuclear installations.

Global warming, despite its name, is not uniform across the planet. At the poles the bump in temperatures — amplified by shrinking snow cover and ice — is greater than in the swathes between, the scientists explained.

This reduces the temperature differences between the Arctic and the middle latitudes, which affects the flow of air around the globe.

In addition, continents heat and cool more rapidly than large bodies of water, the scientists said.

These two factors “result in an unnatural pattern of the mid-latitude air flow, so that for extended periods the slow synoptic waves get trapped,” Petoukhov said.

Fellow author and PIK director Hans Joachim Schellnhuber cautioned that the 32-year period used in the study is too short for definitive conclusions.

“The suggested physical process increases the probability of weather extremes, but additional factors certainly play a role as well, including natural variability,” he added.

Nevertheless, he called the new research “quite a breakthrough,” that helps explain the relationship between the spate of weather extremes and climate change.

A report on extreme weather of Australia has attributed this problem to the climate change. Recently, the Australian weather witnessed scorching heat.

This heat of summer affected eastern and southeastern coasts of the country. Such weather has been followed by heavy rains and flooding in the more densely populated states of New South Wales and Queensland.

This instance left at least six people dead and approximately $2.43 billion was damaged along the eastern seaboard. At least 123 weather records were broken recently in a short span of 90 days.

Shocking figures have unveiled that in 102 years since Australia began collecting national records, there have been 21 days when the country showed temperature of more than 102 degrees Fahrenheit (39 Celsius), and eight of them were in 2013.

The signs of rising water are everywhere in this seaport city: yellow “Streets May Flood” notices are common at highway underpasses, in low-lying neighborhoods and along the sprawling waterfront.

Built at sea level on reclaimed wetland, Norfolk, Virginia has faced floods throughout its 400-year history. But as the Atlantic Ocean warms and expands, and parts of the city subside, higher tides and fiercer storms seem to hit harder than they used to.

Dealing with this increased threat has put Norfolk at the forefront of American cities taking the lead on coping with intense weather, from floods to droughts to killer heat, without waiting for the federal government to take the lead.

“Extreme weather preparations continue across our mining operations in anticipation of the cyclone moving further inland,” the miner said in a statement.

“Additional operations will be suspended if necessary,” it added.

BHP Billiton had earlier suspended shipping and rail operations at Port Hedland, with all personnel safely evacuated from site and tie-down activities completed, the company said.

Having strengthened to a Category 4 system overnight, Rusty was downgraded as of 0600 GMT to a Category 3 system that is due to move over land late Wednesday afternoon, Australia’s Bureau of Meteorology said in an update on its website.

The cyclone is expected to cross east of Port Hedland, which will escape Rusty’s worst winds, the bureau added.